A downloadable game for Windows

I might change it so attack spacebar doesn't cause move spacebar, cause I had a problem where attacking a guy put me into a spot where I was just on the edge of a move block and it put me into a sequence I couldn't escape cause I was heading towards the corners of a hallway entrance and bounced on the corners.

The idea is still great and it's probably a low rate of occurrence issue, just pointing it out if you haven't seen it.

Edit:  It might also work to put arrows in more places that don't directly head to the goal but do allow you to either make more wrong moves (in a good way) or escape somewhere you don't want to be. 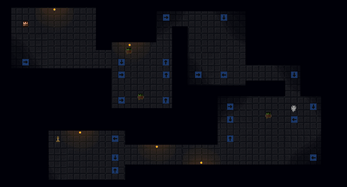